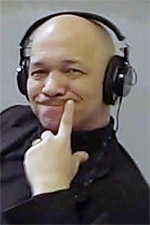 KPFT's Unsuccessful Vegetable Salesman , Leo Gold, is still not Syndicated, and resurrects the Healthy Station Project model for KPFT. Twit Wit Radio from Berkley. The Gary Null Hypothesis, and other Wormholing embarrassments from the so-called Left.
The Innerside Radio program will henceforth refrain from terms like 'ruling class' and 'bankters' if the New Improved Independent KPFT emerges. There are thousands of untold dick jokes to exploit if I need to learn my place.
Again .