So we had the car packed, and a place to stay in Austin and Rita is apparently baring down on Houston, and we're ready to roll , and I drove out to the freeway and it was STOPPED, dead, all the gasoline had been sucked out of Houston, and the stalls had effectively gridlocked every artery leading out of town. We weren't going anywhere.

My wife grabbed one of those 5 gallon office cooler bottles from work, it was an old school glass bottle, they are water snobs or something, and I think the transport in the trunk of the Saturn through the city streets must have put a hairline crack in the thing because when I carried it in, and put it down on the carpet, the goddam thing SHATTERED, and drove a huge shard deep into my hand.

The hurricane is still 24 hours off the coast, the sun is shining, the air is still as the Interstates, but already, the goddam living room is totally flooded, and I'm bleeding all over the place, and need stitches. 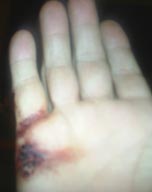 THEN, the POWER goes out!!

Apparently the Reliant Energy idiots decided to do a last minute line check, and spotted a particularly menacing branch looming over the main feed into the neighborhood, unleashed a chain saw, and dropped the fucking branch on their own power line, knocking out about three thousand customers.

By now, the windspeeds were approcahing two miles an hour and there were as many as two or three sinister little white clouds threatening a ghastly blue sky. All the stranded neighbors swarmed onto the streets in a frantic lawn chair and Margarita frenzy.

Reliant fussed around for a few hours, got the power back on, and we were now ready to SERIOUSLY hunker down and await the viscious onslaught of level four RITA !!

We invited our radio friend, Otis Maclay out to our brick suburban shithouse, since he lives dangerously close to a bayou, and he showed up with a carton of cigarettes, a case of beer to add to the one we already cached, a bottle of Tequila, and a bag of food, to help us through the oncoming disaster and protracted, stone age aftermath.

He also brought a professional Gentner phone interface, scavenged after a station upgrade, an extra mixing board and mikes to augment state of the art gizmos at camp Scooter studios. We planned to open up a stream online and do INTERNET radio until the cable went down, or we were crushed under falling debris.

I put the word out that we would be reporting from 'RITA ground zero' on several lengthy radio emale lists, which caught attention, and the post immediately spread all over the world.
People love disasters.
We had tapped into the morbid curiousity demographic.

We patched it all together, opened the stream, announced the phone number, and immediately started getting calls from the entire English speaking planet. Individuals, journalists and live radio station reports from Austrailia to Alaska.

We had captured the attention of the post Katrina global horror , and had harrowing stories of oncoming predictions, certain doom, tales of clogged freeways, and millions of fellow Houstonians, trapped in the path of a Level Four, with no way out.

Time wore on, an ominous darkness descended upon the skies, not long after sunset. We hooked up a wireless mike, and ventured out into the streets, where you could hear the frightening rustle of trees and the deafening roar of voices in the wireless headphones.

Voices from Finland, New Zealand, little radio stations in Canada and big ones in New York, we were indeed in the eye of a monstrous media cyclone.

It went on for HOURS, we thought, when will this end? But there was plenty of booze, the cable still worked, the phone was still going and the show must go on.

Terribly, the children went first, curling up on the only couches they could find, then my wife was next, crashing on the King Size........ it was down to just me and Otis, and what had become a moment of disaster and horror in the annals of radio journailsim. Otis weaving at the desk mike, and me.....outside in the elements...

"Ists fucking dark, man I can't see shit, but, there is that schmell, like it's going to rain or something, and it's sort of windy.... I think... aw fuck!! I stepped on the goddam cat, man this shit is DARK out here, hmmm okay I turned on the porch light, and I can't see shit man, but it's really humid...."

YET, the calls kept coming in.... then Otis finally succumbed... I was alone, in a disaster zone, with no disaster....

and I don't remember anything after that. 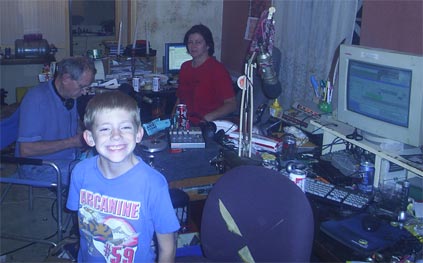 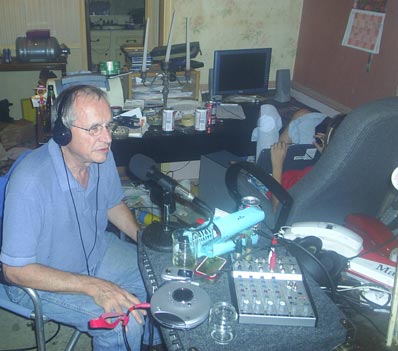 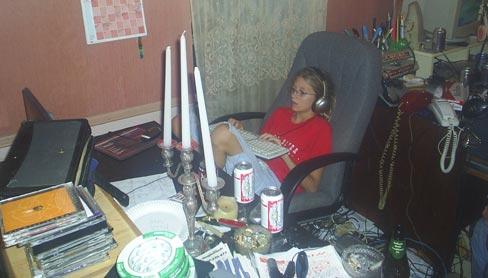